Much of today’s successful technologies had humble beginnings. In fact, these tech giants’ early beginnings were bereft of all the comforts of a fully furnished office.

For instance, Google started out in a dorm at the Stanford University in California. Schoolmates Larry Page and Sergey Brin, despite their clashing ideas, developed its search algorithm called “BackRub” in 1996.

From their dorm room, they built the BackRub as links that determine the importance of individual pages on the World Wide Web. As its popularity grew among the Silicon Valley investors, funds came flowing in, and saw themselves raking in millions of investments that turned their start-up company into a billion-dollar business. BackRub, a play on the mathematical expression for the number 1 then followed by 100 zeros, became the unbeatable internet search engine.

Similarly, James Dyson, the inventor of Dyson vacuum cleaners launched his product after 5,127 iterations that were created over a period of five years in his garage.

Today, Google and Dyson earn hundreds of billions of dollars from what was once a backyard side project.

Although not all ideas could be a billion-dollar technology, but a simple idea could just be the solution that the world is looking for.

Known in its inception as an offline science library-in-a-box, STARBOOKS contains thousands of digital resources on science, technology, engineering, and mathematics (STEM) that are easily retrievable.

From a small offline kiosk standing in one corner of the DOST-STII library in Bicutan, STARBOOKS became an overnight sensation among the government initiatives that is touted to boost the country’s stock on STEM.

He noticed that only few people were going to libraries nowadays. “STARBOOKS could just be the simple solution that we need in raising the level of our aptitude in science and mathematics,” Liboro said in one of his interviews. 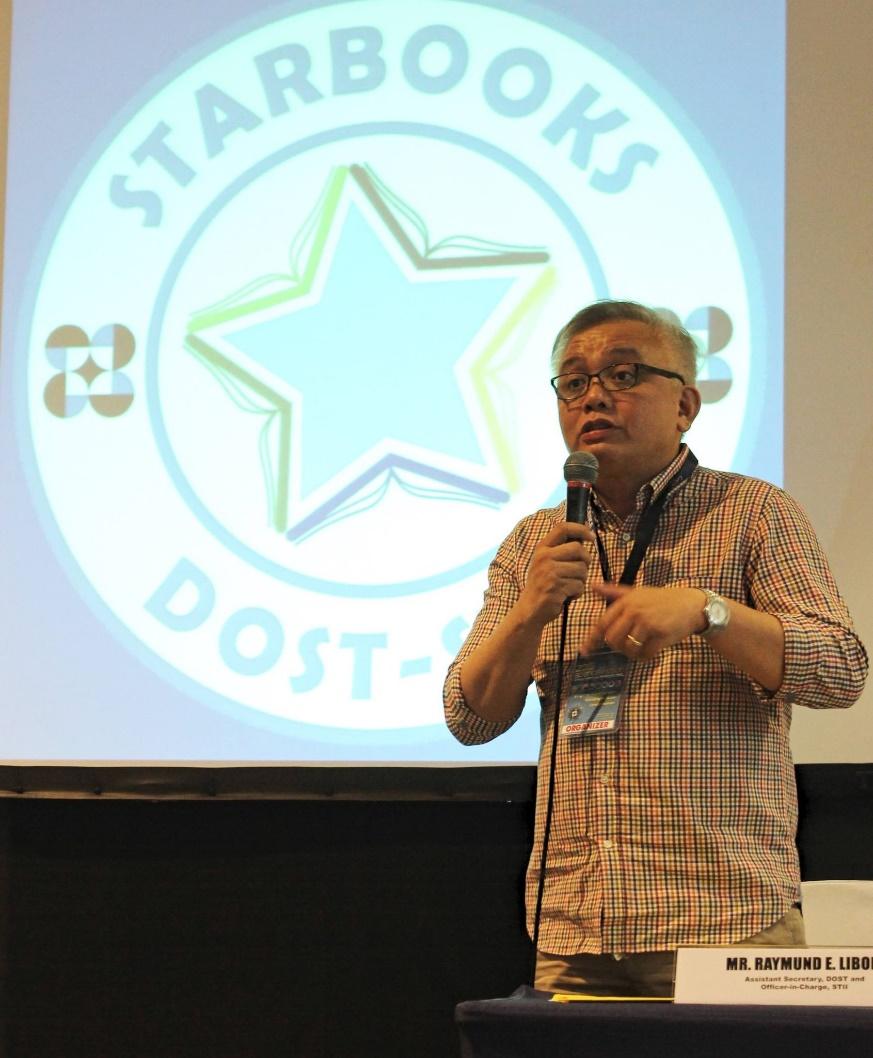 Former DOST Assistant Secretary and DOST-STII OIC Raymund E. Liboro was instrumental in the conceptualization and development of STARBOOKS.

This skunk work project was originally designed to be an offline-onsite S&T library information and resources tool. Its name was coined as a wordplay on the famous coffee beverage store, where a user can take his/her coffee while reading through different magazines.

In a simple launch in 24 June 2011, at the lobby of DOST-STII, then DOST Secretary Mario G. Montejo proudly described it as “(STARBOOKS) shall serve as our humble contribution to the world of education and science.” 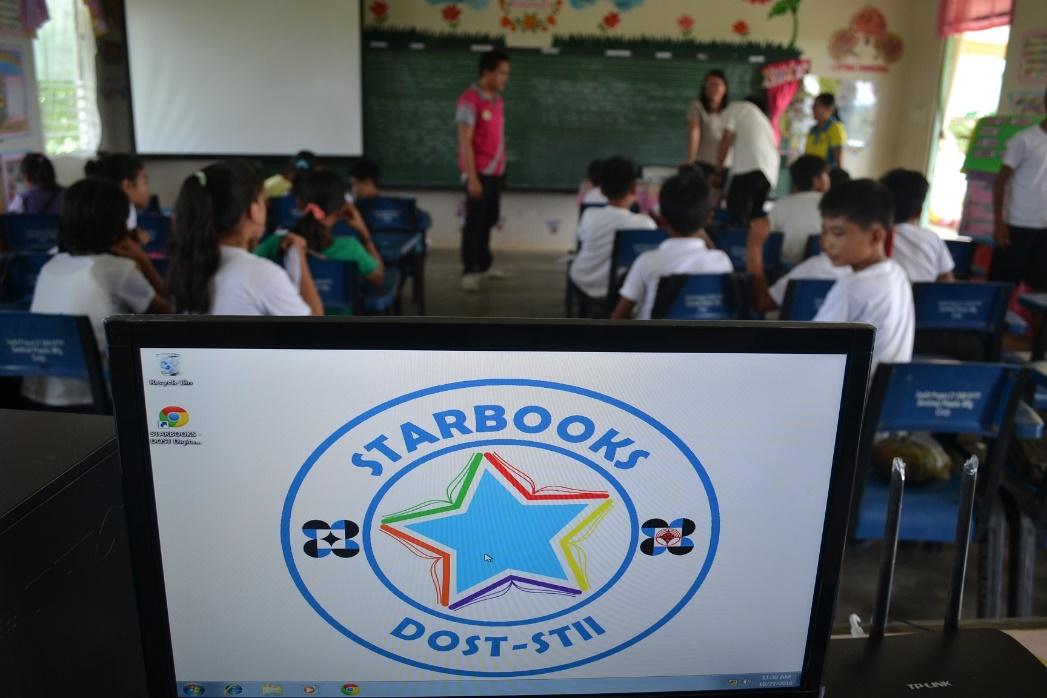 During its earlier years, STARBOOKS had only few first adopters, one of which was DOST Regional Office IX that got a fund to roll it out in the region.

STARBOOKS made the public debut during the 2011 Regional Invention Contests and Exhibits in Davao City as one of the highlighted technologies during the weeklong invention contest.

It was in the succeeding year that STARBOOKS had its first mass deployment in Region VIII through a partnership brokered by DOST Regional Office VIII and the Department of Education Leyte Division under the project titled “Piloting of STARBOOKS in Selected Schools in Leyte”.  The project benefitted 44 public schools in the province.

The novelty of STARBOOKS was its selling point. In 2014, all regions of the country had its own STARBOOKS installed in various provinces, as Liboro explained it “Library system as a platform is evolving. Digital is the way to go.” Soon, more digital library resources

were added to the STARBOOKS system and its network had grown as many organizations in both private and public sectors opened their resources to STARBOOKS users.

The rollout was met with warm reception both from the government and private sectors as local government units recognized its impact to the students where several schools in the provinces and in remote areas lacked books and other learning resources.

It was not that long that several organizations took notice of STARBOOKS.

Following Typhoon Yolanda’s devastation in 2013, STARBOOKS gave everyone a glimmer of hope when it was presented at the World Library and Information Congress of the International Federation of Library Associations and Institutions (IFLA) in Lyon, France.

The presentation centered on STARBOOKS installation in public schools devastated by the typhoon as part of the government’s Building Back Better relief initiative. Prior to Typhoon Yolanda, DOST Region VIII bankrolled STARBOOKS in the region. Unfortunately, most of the units installed there were washed out by the typhoon and deemed unserviceable.

The following year, STARBOOKS received the Presidential Citation for Innovative International Library Projects from the American Library Association (ALA) at the San Francisco Public Library in the United States for “making science and technology materials available to the general public in remote areas that have few information resources, no libraries and little or no Internet connectivity.” 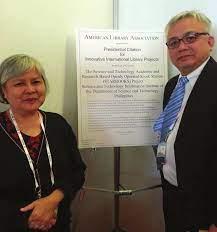 Former DOST Assistant Secretary and DOST-STII OIC Raymund E. Liboro and Ms. Rosie Almucera, chief of the Information Resources and Analytics Division during the Presidential Citation for Innovative International Library Projects given by the American Library Association at the San Francisco Public Library in the United States.

These recognitions affirmed STARBOOKS groundbreaking contribution in educating the marginalized and underserved sector of society.

ALA is the world’s oldest and largest professional organization for librarians. It has played an active role in promoting access to information, opposing censorships and championing the libraries and librarians.

Back home, it was awarded the Outstanding Library Program for 2015 by the Philippine Association of Academic and Research Librarians (PAARL) during their 43rd Annual General Assembly.

After several deployments of the offline kiosks, DOST-STII leveled up and developed the online version to keep in step with the changing demand. This innovation improved its monitoring mechanism and made it easier to upgrade the content in each kiosk.

As the years went by, more awards and recognitions came to STARBOOKS.

That same year, STARBOOKS became a finalist in the 2017 Government Best Practice Recognition by the Development Academy of the Philippines.

Also, in recognition as the first science and technology library-in-a-box that works offline, the Presidential Communications Operations Office recognized STARBOOKS with the FOI Special Award at the Freedom of Information Summit on 12 December 2019.

Recently, STARBOOKS was honored as “Excellence in Government Communication Programs” in the 18th Philippine Quill Awards. The Awards commended its impact in bringing knowledge on science, mathematics, and technical fields directly to the people, especially to students in economically-challenged schools and communities. 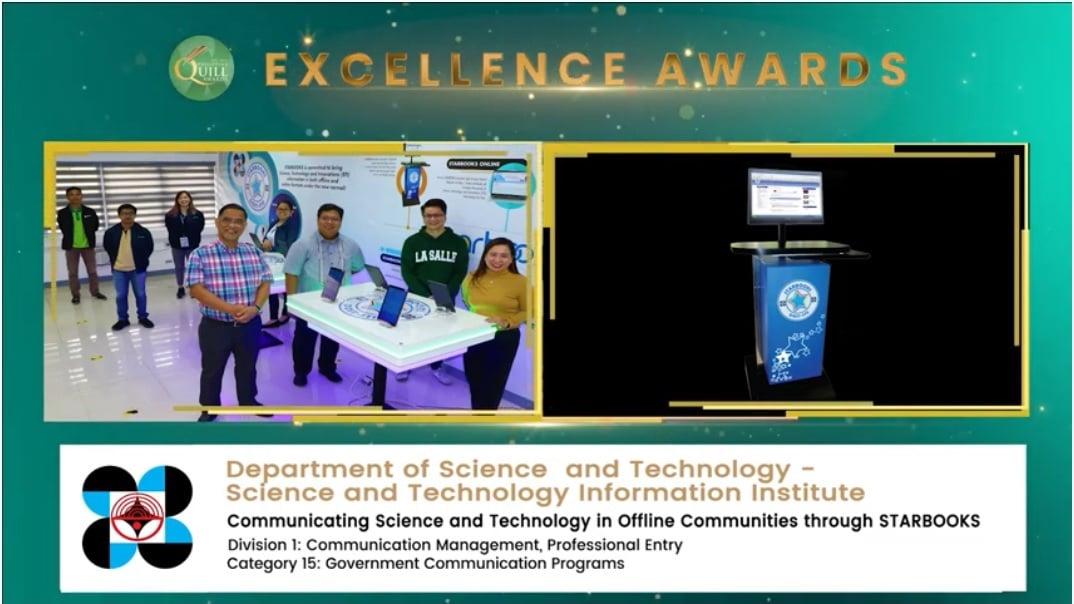 Four years had passed and STARBOOKS was no longer a secret among select beneficiaries as it received the admiration of international organizations as an innovative tool for S&T learning.

The US Peace Corps in 2015 visited STARBOOKS to learn more about this innovation. Volunteer Ji Yusi from Chengdu, China praised STARBOOKS for its user-friendly interface and the vast collection of information and available videos. Ji was surprised to see how STARBOOKS was able to integrate a library system into a standalone kiosk that was unheard of in her hometown. “We are learning from your experience,” Ji added.

Meanwhile, Elizabeth Karr, a Peace Corps librarian described it as cutting-edge and advance as database resources are expensive to build and maintain.

Moreover, STARBOOKS was also invited to the Annual Kuala Lumpur Engineering and Science Fair (KLESF) in MINES International Exhibition and Convention Center at MINES Resort in Selangor, Malaysia as one of the Philippines’ exhibitors. 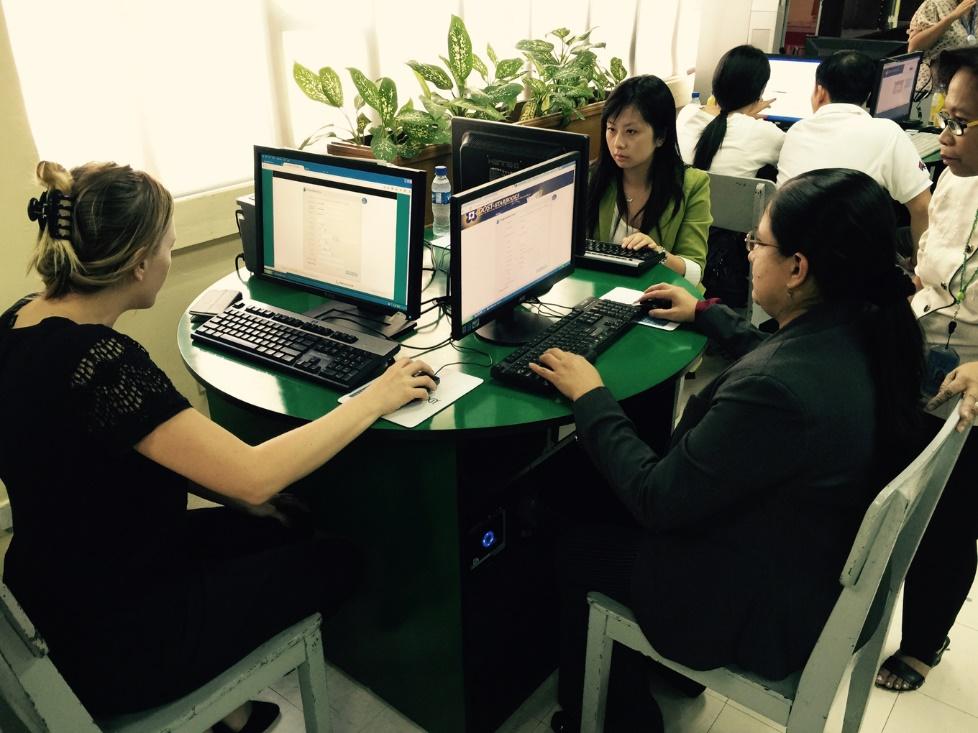 Volunteers from the US Peace Corps visited DOST-STII to get a glimpse of this latest innovation from the Philippines.

From its initial run in 2011, STARBOOKS had its 1,000th site installation in 2016 in Calauan, a second-class municipality in the province of Laguna. This milestone also marked the launch of Super STARBOOKS, a much-needed product upgrade. 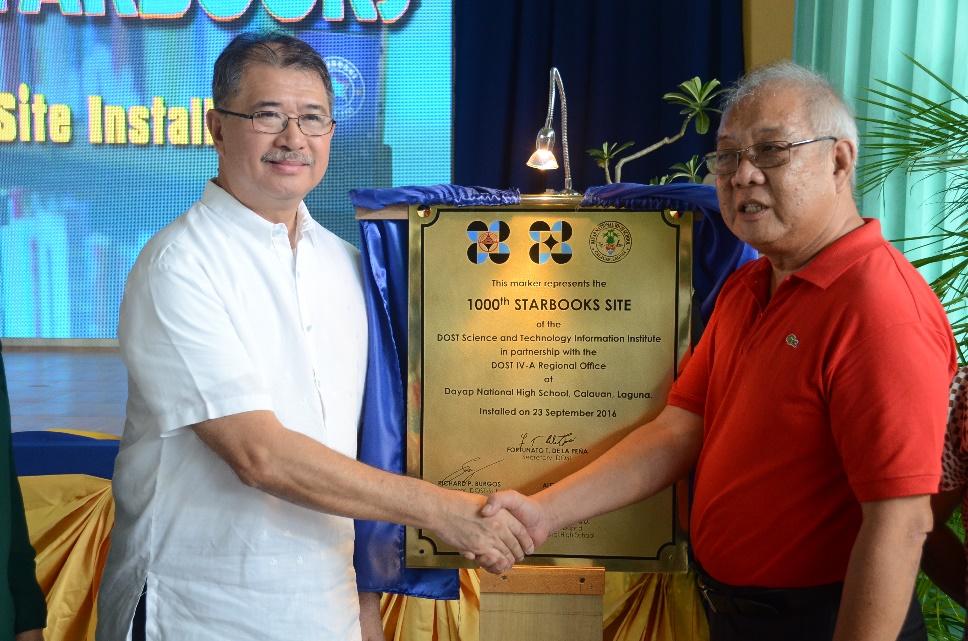 Dayap National High School was the first to have the Super STARBOOKS marking the shift to upgraded contents and terminals for additional users. It now provides students, researchers, and S&T aficionados with thousands of free S&T related materials in text, audio, and video formats. Among these were K-12 interactive courseware on mathematics and science developed by the DOST’s Science Education Institute, livelihood videos dubbed as “TamangDOSTkarte” that provides parents and entrepreneurial students a thing or two about various livelihood opportunities within their sphere of interest, and other engaging videos.

As the new DOST secretary, Prof. Fortunato T. de la Peña shared how the Science Department “strives to cut boundaries so we can reach those who are in need of our services and assistance, alleviate poverty, and expand our local industries.”

At present, with the prevailing pandemic that has changed the work landscape, DOST-STII and STARBOOKS saw another opportunity -- the need to develop mobile applications, engaging websites, and alternative ways of engaging the public and various stakeholders. As a result, it was able to nimbly pivot to the demands and challenges of the ‘new normal’ by adding new and exciting mobile apps. 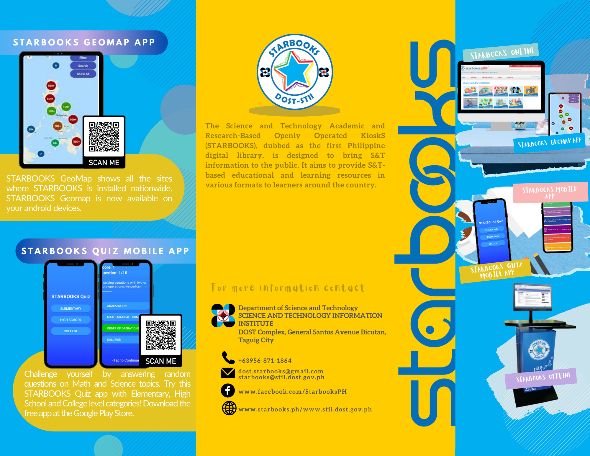 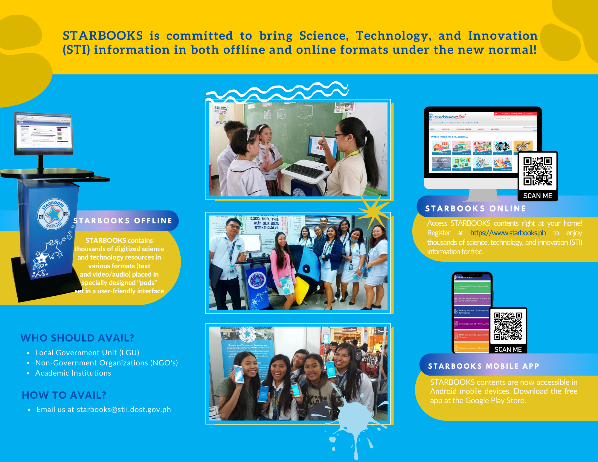 On its 10th year, with the theme STARBOOKS@10’To!, STARBOOKS is not slowing down nor resting on its laurels. It has set its eyes on a grand vision with plans that are already in store for the public. In the age of Artificial Intelligence and autonomous technologies, the public is assured that STARBOOKS will continue to outdo and reinvent itself and remain relevant for the next 10, 20 years or more. (By Joy M. Lazcano, DOST-STII)